The bewilderment, the despair, arise from fear that nothing “could e’er be caught” from these new surroundings.
—W. Jackson Bate, from John Keats

The first time I deliberately traveled to a place to write was about thirty years ago. I borrowed a friend’s outbuilding on Martha’s Vineyard. It was an act of desperation, an attempt to claim some sort of writing life just before the birth of my first child. Will, the owner, was a woodworker, an artist whose specialty was building custom mahogany window frames for celebrities in Manhattan (Paul Simon, David Letterman). With its appointments, that intimate vertical space was a gem: integrated bunk and desk, tiny porch, patinaed brass screens. A potential wellspring of productivity, solitude, and silence, interrupted only by Will or his wife Kathleen calling me in for drinks or coffee. Kathleen’s father had written a definitive work on P. B. Shelley, and I took this as augury, consecration. For the occasion, I had even bought a new computer, a Mac Plus that I unboxed excitedly and learned to use as a cold, light November rain sifted through the oaks. For strolls, Lucy Vincent Beach was my go-to. I bought a copy of Lowry’s Under the Volcano at the bookstore in Edgartown and read it while reveling in the ceremony of lighting and maintaining a woodstove. On the bookshelf in front of me right now is a flat, black oval stone I pocketed on one of those beach forays. The magazine that published the one poem I wrote that weekend disappeared along with the floppy disk to which it was saved.

My fellowship at the MacDowell Colony was abbreviated by a horrific storm. Light snow became freezing rain that ravaged the compound and took the town of Peterborough (and a sizable portion of the state of New Hampshire) off the grid for over a month. One writer’s car, windows blown out, roof compressed against its dash, was crimped like a trodden shoebox by a giant oak branch. As the December storm gathered strength throughout the night, I listened to the trees buckle under the weight of accumulating ice, boughs snapping with rifle-shot clarity, trunks bending then exploding like artillery. I didn’t sleep at all, certain that my own cottage would be piledriven. It was apocalyptic. When it turned to rain, I slid off the road trying to drive my own (brand new) car to higher ground. I sat there, paralyzed, watching the water in the culvert climbing above the doorjamb. By the time I leapt out the window, the swollen brook was thigh-deep. After slogging to shore, I went back to my cabin for dry clothes, then spent the day waiting nervously for the overwhelmed grounds crew to rescue the vehicle. Because I lived within striking distance, in the eastern part of the state, I left three days before my allotted residency was up. Once I got home, I took a hot shower, then, instead of returning to my manuscript, to work, drove straight back to deliver a case of IPA for the guys who’d winched me out.

The place I rented in Ocean Beach, a hip garage apartment, was like a treehouse at the top of a spiral staircase. But this was only after I’d lost three thousand dollars on Craig’s List for a fraud in Hillcrest, which actually existed but wasn’t for rent. I sat like a bewildered vagrant among the dried leaves on the front porch for over an hour, trying to call the “realtor.” Finally, a young man, the jittery housecleaner, his vacuum stalled in the hallway in back of him, emerged and asked me politely what I was doing there. Back on the sidewalk, pacing, I called my wife in New Hampshire. Though pissed off, she soon secured the funky hovel in OB through her own reliable channels on Airbnb. She felt sorry for me, that a chunk of my sabbatical would be squandered because of impatience, gullibility, and naivete. Sheepish but conservatively buoyant, I drove through Point Loma over to the new place on Santa Cruz Avenue, but decided to check the surf at Sunset Cliffs on the way. The winter swell looked promising: gray and glassy, not many people in, the tide backing out. I had my board and wetsuit in the back of the rental SUV, so I went in for a few hours, snagged some clean, chest-high peelers and felt much better, my head sluiced of the shame of being swindled. It was a reasonably productive month, but every morning was torture, my four hours of writing invaded by thoughts of waves I might be missing, or the anticipation of pints and a game of pool with my son and his friends at the Catalina Lounge.

The main building at Fifth House was a converted early twentieth-century hunting lodge, and I rented the compound’s sole independent cottage a few hundred yards away, perched regally in the upper corner of an overgrown pasture. Far from the other writers, I drank scotch at twilight on the wraparound porch, had nightly staring contests with deer and one swaggering fisher cat. There was a gorgeous spring-fed pond just down the road. Unlike the classic tannin-steeped, amber waters of many Maine lakes, Adams Pond was luminous, translucent green. It was late June, and soon I was strapping my canoe to the roof of my car, sneaking over in the afternoons of hotter days for a swim out in the deep spot beyond the lily pads. Soon, I was driving down there early evenings, too, to fly fish, and discovered that it was loaded with beefier smallmouth bass. In one shady cove at the southwestern corner, there were a few large maples that had keeled over into the pond the previous winter, visible beneath ten feet of black, spooky water. It was here that the more sizable fish hid, lurking beneath submerged trunks or hovering in branches velvety with pondweed, rocketing out like predatory, wingless birds as my olive “woolly bugger” streamer coaxed them from their dark hangars.

My in-laws’ modest early nineteenth-century house is like the mothership at anchor on the driveway’s canal, while the Bunkhouse bobs precariously near the wild currents of the far field, white pines, deer, wild turkey, and coyotes beyond. No one in my wife’s family can agree on the shack’s origins. Some claim to remember the Bunkhouse arriving on a flatbed trailer from the lumberyard, pre-fab. Others say it was a repurposed chicken coop, already standing when they bought the place in the late ’60s. But no one denies that it became a sanctuary for my wife, her sisters, and their neighborhood friends to experiment with booze, cigarettes, and weed. It was the hideout where our own kids famously sequestered themselves for downing a fifth of Grey Goose they’d stolen from the kitchen. One wall socket, no plumbing, it’s where my wife and I spend summer when we’re not teaching. And it’s where I try to get some writing done. The carpenter who renovated it took great pains to salvage or leave intact the ceiling’s dark, stained wood, the knots of which I study like clouds every morning before I get out of bed, listening to the sirens of male cardinals, squirrels brawling across the roof. There’s an old drop-leaf table I use as a desk out there back to which I wander with coffee every morning after breakfast in the main house. Sometimes, I read in the rotting Adirondack chair I’ve positioned carefully in one corner of the meadow, at the foot of a meandering path my father-in-law mowed through it. These are the hinterlands of a town being obliterated by money, the Duxbury with which people are most familiar (a.k.a. “Deluxe-bury”) back across Route 3, exclusive and smug on the northwestern rim of Cape Cod Bay. Pretending I’m not in the suburbs while keeping my elbows out of the bird shit on the arm rests, I imagine Rilke pacing the parapets of castle Duino. The Princess, his benefactor, is out of town. No response from his Angels all day. Hand to his brow, he surveys the cliffs, the ocean, all that southern light funneled into the Gulf of Trieste, the Adriatic searing, accusatory, and luxurious. Is it cocktail hour yet?

In the final shot of Herzog’s Aguirre, Wrath of God, Klaus Kinski, who plays the title’s demented conquistador on a doomed expedition, is standing on a disintegrating raft as it drifts down the Amazon. Planted in his iconic slouch as the jungle and wide river spin around him, he is pretty much the sole survivor. A seething knot of squirrel monkeys has boarded the craft, swarming from one edge to the other, a twitching pool of ocher fur and black muzzles around Kinski’s legs, some of them abandoning ship, leaping like fleas from a dog’s back to swim in a panic for the shore. Once you see it, you never forget it. Embedded in the actor’s haunted face are genuine layers of existential torment, ambition thwarted, the wilderness’s reflected indifference. I can’t decide whether I’m disappointed or intrigued by the anachronistic, post-modern wake of the cinematographer’s boat as it circles Aguirre’s raft in an effort to capture the character’s vortical disorientation. Look carefully, you’ll see it: physical evidence, the unintended signature of the maker, a brown wave churned by an outboard engine. I imagine Herzog would have deployed a drone if they’d been around in the early ’70s, a tool that would have easily sanitized his directorial intentions, erased his presence. We have to admire the old-school, hand-crafted genius. Even more impressive is Kinski’s ability to ignore what’s happening around him for the sake of his art—those monkeys, that whine of the circling outboard and its anxious camera crew—as he disappears into character, working, just before the wake reaches him. 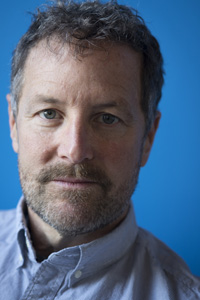 Ralph Sneeden’s poems and essays have appeared or are forthcoming in The American Poetry Review, Ecotone, AGNI, The Kenyon Review, The Common, Slate, and elsewhere. The title poem of his first book, Evidence of the Journey (Harmon Blunt, 2007), won the Friends of Literature Prize from Poetry. He teaches English at Phillips Exeter Academy in New Hampshire. In the summer, he directs the Damariscotta Lake Writers’ Conference in Maine. (updated 4/2017)