At the corner of Haight and Ashbury, here in San Francisco, if you stand in the right spot for long enough you’ll get a pretty decent contact high. Decent enough to float on down the sidewalk, feeling featherweight, past Amoeba Records, past shuttered shops, past extraordinary sex toys and run-of-the-mill Grateful Dead T-shirts, past all that hippie history, right through the Booksmith’s open doors.

That’s how it happened, anyhow, the night of January 17th. Mary Oliver died that morning. I didn’t know her, and for a long time I didn’t know her work either, past a few recycled favorites, all of which is very much my own fault.

Given its location, you’d expect the Booksmith to be stripped of pretense and precocity, denuded of artifice and affectation, but I was there for a poetry reading, and even with mossy smoke wafting in on the breeze, it felt more than a little buttoned up. It was a poetry reading, after all.

Us poets, we know instinctively that there are limits to any and every form. The poetry-reading format hit that wall decades ago: you’ve got your focal point or podium, a microphone (god willing), a matrix of folding chairs, and a room half full of folks who’ve mastered the I-swear-I’m-listening-no-really-I-heard-every-word-didn’t-you-hear-my-epiphanic-mmming put-on. It’s a mask I’ve worn many times—all part of the routine.

The other half of the room, generally, sits empty. Sometimes, those empty chairs slide from their neat rows and columns and scatter about like tombstones in an old churchyard, the ones put in before the imposition of cemetery order.

But let’s be real, I only hear about half of what’s read, even less of what’s said, and that’s rather generous accounting. Chances are, I’m not alone in this. I wish I were, but I’m not.

(To be clear, I mean that certain breed of academic or bookstore reading, not all poetry performances—I think you know the ones I mean.)

Maybe I’m just baling sour hay, but sometimes these readings feel like exercises in going through the motions, participating in the etiquette of literary culture.

Honestly, I’m usually there to support people I love, not to pay attention to poems I’d love more on the page. The reading math usually looks like this: two or three deeply affecting poems (those I can actually pay attention to), a few hours killed, thousands of un-comprehended syllables, one long drive home. But even so, I’ve clung to the formalism of the reading space for the known quantity of it, the community and good citizenship of it, the comfort and safety of reason and routine.

That night, I’d made the trek up to the city to see Dora Malech read from Stet, her new collection of anagrammatic poems, and Austin Smith read from Flyover Country, his latest, which interrogates the intimacies and expediencies of Nature, human and otherwise. It was a packed house. Dora and Austin are people I respect and admire deeply. I also have the attention span of a bubble-eye goldfish.

When I started my MFA, way back when, I wouldn’t have cracked the spine of a Mary Oliver collection for a few hundred bucks, though I could’ve seriously used the money. By all accounts, Mary Oliver should’ve been squarely in my wheelhouse (I too write about the seeming divisions between humans and animals, reason and instinct). Of course, I didn’t know anything about her, other than what I’d heard—that hers was a common poetry, useful at the beach and nowhere else. When my friend’s mom (not much of a poetry reader) re-gifted me a copy of Dog Songs, well, that sealed the deal. My mind was made up. No Mary Oliver, not for me, ever.

Pretentiousness, elitism—so often the chief complaints about contemporary poetry—yeah, I ate those for breakfast. Accessible wasn’t just a dirty word, but the antithesis of what good art looked like in my mind; if there weren’t formal pyrotechnics or a pattern to solve, I’d think, Meh, keep it. It was a personal problem, sure, but it was also a learned behavior, training.

Thanks to that interiority mess, I avoided Mary Oliver’s work for a long time, and once I got over (still working on it; it’s a process) those poetics of ego, I felt like I’d missed the boat, so I pretended to know her work intimately. I smiled and nodded at cocktail parties, at readings. I wore the mask.

Only in the past year have I really read her work, and page by page I’ve been saddled with guilt. I’ve missed so much for so long, out of sheer ego.

Sweet heavens was this dog a menace in the most ever-loving, monstrous, and endearing of ways. Austin tried to keep him calm, tethered, and quiet. It was an exercise in futility. Wendell was restless. I could relate. Wendell roamed free. I couldn’t relate.

You know those over-priced plush toys, squeezed onto spinning towers, back in the Children’s Books section?

Well, now so does Wendell. As Dora explained Stet’s genesis, as she described her interest in seeing how Johan Huizinga’s concept of Homo Ludens might play out through anagrams in verse, Wendell disappeared behind a tall shelf. Evidently, he took a quick shine to a $25 stuffed bumblebee and returned promptly thereafter, tossing his head like a pony and tearing his new acquaintance limb from limb, abdomen from thorax, pipe-cleaner antennae and all.

Eavan Boland, my teacher here in the Bay Area, is fond of a phrase, an idea really, which I’ve become quite fond of too. “Poetry is not a vehicle for expression,” she says, “but a vehicle for experience.” The italicized parts have always made sense to me, and I like it as a quotation, because I know it’s impossible. Of course poetry is both, but the proportions are what matter. The boundaries of what poetry is, though, I’ve never felt sure of. If not a pattern to glean or problem to solve, what? And even if there were a graspable definition, there’s also the “make it new” directive that I’ve heard trotted out a thousand times. How can you study the anatomy of an animal you can’t catch or pin down?

When I heard Dora’s explanation of Stet, behind my best-behavior mask, I rolled my eyes. I thought, Well ain’t that some fleet and fancy footwork to justify a frivolous exercise, anagrams, language play, undertaken for the writer’s enjoyment and not the reader’s, certainly not mine. Not a charitable thought, and not one I’m particularly proud to share, but hey, I’m working toward radical honesty this year.

I was wrong. Stet is a beautiful book. It doesn’t crumble under its own weight, and doesn’t feel self-serving in the least. It feels like a quick peek behind the curtain of whatever natural order exists out there.

But I realized my wrongness, my closed-mindedness, at the moment of maximal, undeniable distraction. There was Wendell, fast at work eviscerating a stuffed animal, holding up its cotton-ball guts for all to see; and there was Dora trying to get through her poems. Naturally, she was distracted too. Then, experience happened. Wonder happened.

Dora was reading from “Descreation Myth.” Wendell was whimpering. Wendell was tearing his friend asunder. I was pretending to pay attention to a poem. The lines were these:

At “O lab / most unsustainable,” the bumblebee alit on the podium. Wendell had thrown it. We laughed. We stopped taking ourselves so seriously. We played. It occurred to me that there’s no division between work and play for Wendell. His internal and external lives are one and the same. Pretense is impossible.

Now I’m not one for supernatural anything, but I looked at Wendell, and I thought, Mary, are you in there? Do you mind if I call you Mary?

For a split second, by pure instinct, I knew what poetry meant. I remembered the etymology of poet, something I’d mostly forgotten since my MFA days. Maker. I could focus on everything, without effort. I felt my mind’s scales tip toward experience. I felt my body’s doors open. I felt the world offer itself. I felt generosity flow out. I was awestruck. 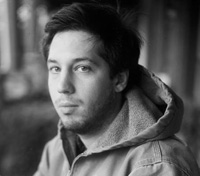 J. P. Grasser’s poems have been published or are forthcoming in Linebreak, AGNI, and Birmingham Poetry Review. He lives in Salt Lake City, where he is a PhD candidate in literature and creative writing at the University of Utah. (updated 10/2016)