About forty years ago, theoretical physicist Michael Goldhaber popularized the phrase “the attention economy” to define the many outside interests that aim to occupy and manipulate our attention. Three of his foundational observations go like this: our attention is a finite resource; way more information is generated than we can handle; and every act of attention to one thing cancels out attention to another thing. His work also anticipated important social issues, among them the ever-widening gap between those who have the means to control attention and those who don’t. For a while now, I’ve been aware of how often I check my phone and scroll around in ways that are unnecessary, meaning I’m not actively responding to emails, checking for a doctor’s reply, reading an article, or looking up directions. Aimless scrolling left me feeling dissipated, and even more alarmingly, it was wrecking my attention.

I’ve felt a discernible shame about my frayed attention. Yes, of course it’s been an intensely focus-shattering couple of years now, but the fact that everyone is scattered did not alleviate my shame. The practice of attention, the overt subject of it, the fruits of it, the ethics of it—these are at the center of my work. My way, as a writer, is to look hard at under-seen things, to feel out language for wordless states of being, to make something of whatever, by chance or design, shows up in my path. I have a solid history, too, of writing in the absence of social media—four of my ten books were written before I had access to the internet—a curious fact now, which solidifies my role, I guess, as ambassador from the before-times.

Let me confirm: this is a self-report, not a call out of any generation, and—understatement here—individual posts, articles, discussions, reports are vital to my work, and to staying as totally hip as I am. It’s the “scroll behavior” that I’m addressing, and that I’ll use as a way to think about ecosystems.

Here’s what attention lavished on scrolling feels like to me. There’s very little texture, or nap to it—it slides and skids. That brief rise or ping we now know is a jolt of delicious dopamine, feels good and soothing at the outset, but it’s not a sensation that sticks, physiologically or otherwise. In fact, after my eyes graze over so much disparate/unorganized stuff (recipes and gossip, movie reviews and medical advice, polemics, poems, porcupines in love), when I try to recall any one of those items, even within, say, an hour, I have no idea where I first saw it—if I can even remember what I saw; the flash flood of information washes out the bridge. The sensation is one of wandering aimlessly, picking up and putting down partly-interesting objects with a sense of generalized indifference. I started noticing something else, too: the impulses powering my behavior weren’t even articulated. The reason for checking and scrolling was rarely in response to an actual inquiry. The impulse to scroll remained a vague itch, and yet it drove my behavior. I’d check my phone at a red light, in line at the store, on a walk, before bed. You probably know there are now toilet paper holders with a little shelf made especially for your phone. The seeking was passive, the reward pale, the sense of agency bled dry. I checked reflexively, without intention. I needed to make big changes.

Once upon a time, when checking and scrolling were not an option, there existed so much interstitial space. The gap between one activity and another was an open field, a transitional territory. An ecotone. Riparian. Estuarial. What did I do in that interstitial space while walking, or waiting, or in a pause while writing? What actually happened when I sat at that red light, or looked up from the page, kind of lost? Let’s take the last one—the experience of hitting a wall while writing. In the past, I’d stand up and get some water, wash a couple of dishes, step outside. Or on trains, I’d turn from writing to the gold light on ruined houses, hawks overhead crossing the same river, the power lines necklacing by. I’d find a point in the distance and cast myself out into far meadows, hold myself in the green long enough to imagine the cool, mossy shade on my body. Recalling the specifics now, I can see more clearly exactly what’s being lost. Scrolling displaces observation, shuts out occasions for self-generated thought, silences out-of-the-blue invitations. Checking the phone reroutes the discomfort of blankness and emptiness. It stoppers authentic—often anxious—waiting. And, even more disturbing, scrolling narrows the field of my curiosity. I take what I find there; I don’t make adventurous or consequential inquiries. I used to sit with boredom all the time—oh, I flinched and chafed, but I always found my way out, or around it. In habitually checking messages, I lost the chance for intimacy with slow dawnings, the feel of big decisions sending down early, tender roots, or green thoughts pushing up through the hard ground of doubt and uncertainty into light.

Michael Goldhaber’s frame, attention as currency, holds one form of truth, but it isn’t my language. When I passed his metaphor through my own metaphor-making brain, I came up with one that feels more precise and more poignant to me—attention as inner ecology—and then, I could see ways that a holistic system was imperiled. I could see an inner landscape as a patch of thriving rainforest, a complex, interdependent ecology slashed back and stripped bare to accommodate the incursions of an export crop (and as we know, export crops don’t feed the locals). The long-rooted, sustainable world of my internal geography was being upended, transformed. Social media’s algorithms, Manifest Destiny style, took the wide-open space of my attention as empty land to be colonized. And to colonize desirable space, land has to be first defined as free, available for the taking. Which means, conveniently, the land has no life, or reason, or desire, unto itself and isn’t already a “home.” But my attention is not free for the taking—it’s mine. And once I felt that my own very precious ground-of-being was overrun and manipulated, once I identified the extractive behaviors I was being recruited for, I could see that I had to exert far more agency. If I believe my inner world is an “ecology” and social media’s algorithms are “incursions” and “extractive”—then I have to think hard about my own part in sustaining the fragile space of my attention, a place I’ve been cultivating with great care all these years.

Contemplative space is hard to define. Contemplation is generally not a practice that offers immediate jolts of anything. There’s (well, usually) no chatty/ethery response from on high, no neatly cleared path unfurling after a good long think. In fact, more often it feels like “nothing” at all is happening in that open space. The “soft” characteristics of any kind of contemplative behavior (slowness, eddying, meandering) make it easy to devalue. And this, too: creative space often feels resistant, like it’s denying us something, won’t speak, won’t produce—when in reality it’s just quiet, it’s not dancing for us, or “entertaining,” or feeding us dopamineedibles.

It’s become more and more important to me to name what’s being lost when contemplative space—or, call it Art Space—is colonized. That space—where you look up from writing and don’t know where to go or what to do next, where you sit at a red light, wait at the post office? Something lives in that space that’s being hurt and displaced by calling in the “elsewhere” of messages, news cycles, TikToks, and so on. A relationship to something as yet unknown and under formation is being turned away from, diminished, not-built, ignored.

What happens in open, fertile space cannot happen anywhere else or by any other means. This in itself feels to me like an occasion for awe, and the more I can preserve this space, which is fragile and requires care, the more I feel I’m touching some kind of potential—my own, the imagination’s. I might be changed by I-know-not-what, and I-know-not-how. And that’s always been what I’ve most wanted: to be in the path of Mystery, growing it, and being grown by it. 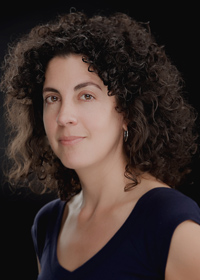 Lia Purpura is the author of nine collections of essays, poems, and translations. A finalist for the National Book Critics Circle Award for On Looking (essays, Sarabande Books), she has also received Guggenheim, NEA, and Fulbright Fellowships, as well as five Pushcart Prizes, the Associated Writing Programs Award in Nonfiction, and other honors. Her work has appeared in The New Yorker, The New Republic, Orion, The Paris Review, The Georgia Review, AGNI, Emergence, and elsewhere. She lives in Baltimore, where she is writer in residence at The University of Maryland, Baltimore County. She has taught in the Rainier Writing Workshop’s MFA program, at Bread Loaf Writers’ Conference, in The University of Iowa’s nonfiction MFA program, and at conferences, workshops, and graduate programs throughout the country. Her newest collection of poems is It Shouldn’t Have Been Beautiful (Penguin), and her latest collection of essays is All the Fierce Tethers (Sarabande Books). She  is a contributing editor of AGNI. (updated 4/2017)

Purpura’s AGNI essay “Glaciology” won a Pushcart Prize and is reprinted in the 2006 anthology.