I’m German, and with the exception of short vacations I never left the country before my mid-twenties. Then I moved to Pittsburgh, PA. When I was living there, people sometimes asked me: “Where did you learn English?” My answer was always the same: “In school.” As in: not at home—I wasn’t raised bilingually.

While technically true, my answer was also incomplete. My relationship with English started much earlier.

I remembered this when I heard my son, Floris, who is about four and a half years old now, sing along with the songs of the Beatles. He mostly speaks Dutch (his father’s language and the language of the country where we live) with the occasional word of German, but when the Beatles are on, he imitates the sounds he’s hearing, filling in syllables to complete the melody. He usually gets the vowels right. One of his favorite songs is Hey Jude, and when Paul McCartney sings “to make it better, better, better…” Floris joins in with his own version, “make it bero, bero, bero, bero…”

Listening to this fantasy-English in progress I recall the time when my brain was in the same state; when instead of German and English there was only Language, and language consisted of any sound you could make. I know my personal copy of English still has a few issues—not fatal, hopefully, but noticeable, remnants of this early stage of messy, uncritical assemblage. I like this idea. I like talking to my friends about our favorite English songs, and what we thought they were saying before we knew the words.

I first consciously listened to the Beatles in my mother’s car, an old Renault 5. I was older than Floris is now, but I still had some years to go before I’d start learning English at school. My mother had recorded a radio show where people could call in and ask for a Beatles song, and we would listen to the tape—both the talking and the music—whenever we drove to my grandmother’s allotment. The songs’ titles (as pronounced by German fans) became part of my early version of English too, distorted not only by tape and radio but also by the weak lens of my existing knowledge. One man called in to request, with a slight twang he probably thought was authentic: “You gotta hide your lovaway.” In my mind, the title became two parallel sentences: “You gotta hide, you lovvo way”—as if the second part was a repetition of the first, another way of saying the same thing. My mother, like my father, barely spoke English and wasn’t any help. Help! as a title was simple enough, but the lyrics again changed shape in my bubbling brain. “I’m not so self-assured” was then (and deep inside of me always will be) “I’m not so safe ashore.” Let It Be sounded so simple. My mother translated it literally: Lass es sein! Translated back into English, this means: Don’t Do It! Knowing the song, this didn’t feel right to me. But I couldn’t argue—not yet.

My mother was quick to point out that, while she liked the Beatles, she liked the Rolling Stones better, and she adored Mick Jagger. She said she was always a rebel. There are pictures of her with long hair and bell-button jeans, plucking notes on a guitar and frowning while walking down a path in the same allotment where she would later take me. She could have gone on to secondary school, but she got a job and moved in with her boyfriend instead. The joy of escaping her parents’ supervision was clear to her; the benefits of staying in school only struck her when she had me. Her love of Jagger never changed. She once recited her favorite line next to me in the car, the English obviously rehearsed and her German accent thick: “I can’t get no satisfaction!” And, with a glance at me, the translation: “Ich kann keine Befriedigung kriegen.” The English sounds angry, the German sounds like an awkward piece of personal trouble you only share with your doctor.

The first book I read on my own was a German children’s book called The Little Vampire, but the Beatles weren’t far behind. My parents owned _The Beatles Songbook—_selected songs by the Beatles translated into German, and accompanied by illustrations I found disturbing. The one next to Taxman showed a fat man in a suit whose head was also a meat grinder; he stuffed things into his skull and emitted noodles of processed paste from his mouth—at least that’s the image of my memory. Another one showed a smiling John Lennon lying on his belly. His back lifted up and twisted back like a scorpion’s tail, and his feet were walking down a staircase into his own head.

Being able to read along with the songs generated the first official entries in my brand new dictionary. I corrected past mistakes, e.g., I finally learned that Fixing a Hole means repairing the hole instead of “sort of keeping an eye on it,” as I had always assumed. The corrections made room for new errors: Love Me Do was translated as “Komm, hab’ mich lieb,” or “Come here and love me,” and for a short while I thought you had to add “do” to the end of a sentence if you wanted a person to do something immediately. I also encountered the first examples of translators claiming their artistic freedom. What did John Lennon mean when he said “I’d love to turn you on?” My mother, illustrating her point by getting up and dancing in place, said that being turned on means the feeling you listen to your favorite song at a high volume. So I was surprised when whoever translated A Day in the Life chose to go with “Ich will euch Zucker auf den Po streuen.” Or, translated back into English: “I want to pour sugar on your butt.”

I started taking English at school when I was eleven. The time for making mistakes without punishment was over. We were drilled on weekly vocabulary lists and all possible types of if-clauses, asked to stand up and enunciate alternating vees and double-u’s (“very well, vvvery ou-ell”), and come to the blackboard to spell words like “necessary” until our neatly-bunned, Oxford-educated teacher was satisfied—or as satisfied as she could be, given the human material she had to work with.

However, the unofficial story of my English education that had started with the Beatles continued. At the time, I was reading a teenage magazine called BRAVO—quite a cheerful name, considering what being a teenager is really like. Each issue contained the lyrics of two current hit songs along with a German translation. You could cut out the pages and glue them together so they became a book: the “BRAVO songbook.” I must have collected hundreds of them over the years. It didn’t matter whether I liked the song or the lyrics. I carried it with me all day, and read in it often. I still remember the texture of the flimsy magazine paper, the smell of the glue that had leaked out between the pages and hardened, the stiff blobs of it that darkened the text. The songbook taught me new expressions: She’s got the look. Giving you the benefit. Straight up. Manchild. Jerk out. It taught me lines that completed the dialogue in our textbook. “Hi, I’m Mike. I’m from Colchester. We live in a semi-detached house.”—“Shut up and sleep with me.” I learned that a genie in a bottle was only distantly related to the German word for “genius,” even if you rubbed her the right way.

Whence the fascination of the songbook? A large part of it was being a teenager, of course, and looking for my own world far away from parents and school. But it was also, in the case of lyrics that weren’t inane, my chance to regain a sense of language-related wonder, insecurity, of lawlessness almost. A chance to see the branches that were beyond me and take a leap. In the songbook I didn’t have to do anything correctly. I was allowed to imagine.

A random pick from my memory: Neneh Cherry with Buffalo Stance. I bought the record from my pocket money after reading the lyrics, put it on in my room using my father’s big old headphones, and read along. The first three words: Gigolo, huh, sucker—like code from another world. Then, she let me hear it:

Who’s that gigolo on the street
With his hands in his pockets and his crocodile feet
Hanging off the curb, looking all disturbed
At the boys from home, they all came running
They were making noise, manhandling toys
That’s the girls on the block with the nasty curls
Wearing padded bras sucking beers through straws
Dropping down their drawers, where did you get yours?

That question left me hanging. Where did I get mine? I didn’t own a dictionary, so I couldn’t look up the words I didn’t know, which would have left me with a baffling lack of context, anyway. Like the songbook translation, my brain stayed in literal-land and painted a scene in which the gigolo (a funny looking man in a suit) really had crocodile feet while he looked all “disturbed,” which meant crazy and scary, like Alex on the Clockwork Orange movie poster, and the boys, not the girls, were the toys: plastic robot figures who made fake shooting noises and did something called “manhandling”: clumsily chopping the air and picking up rubble. The girls were like dolls you could dress and undress with their padded bras and dropped drawers, and their strange beer bottles with straws that fit their plastic lips.

I knew I was making stuff up, but that was the point, too: to counter the singer’s speed and control with an effort of my own. It was exciting. On the outside, I was sitting on the floor with huge headphones sliding down the sides of my head, but inside me, my heart was racing, the pulse of my neurons swept up by the desire to express myself.

I didn’t listen to this song and others thinking, “One day I want to write like this.” I didn’t start writing in English until many years later, under different circumstances, and when I did it was about different things. But reading the songbook while listening to music was the thing that kept me learning. It gave me an idea of what language could do to a listener: it could surprise, impress, and ultimately silence. I spoke. You may nod, then leave. Too soon, I thought I had that ability, when all I did was bounce around on my little trampoline and watching the certified acrobats do tricks that were not safe for me to do.

In fact, English never started to feel safe. Every day, the world forces me to correct assumptions I had about the English language. At a snail’s pace, I’m still learning, still getting bero.

I always felt safe in German, and never appreciated it until now, when I barely get to speak it anymore. I think everyone feels like this about their first language, or at least everyone should.

When someone asks me how to express a certain thing in English, I try to refer them to a native speaker. If that’s impossible, I offer a few possible answers, and provide my reasons for each, always with the caveat, “but remember…you know…grain of salt…”

When someone asks me how to express a certain thing in German, I just tell them. Are you sure this is correct? Yes. Why? Because I know. Sucker. 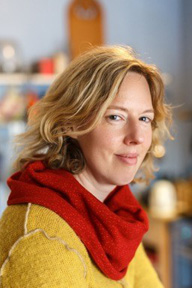 Stefanie Nellen’s stories have appeared in Glimmer Train, AGNI, Third Coast, CutBank Magazine, and elsewhere. Her work has won the Glimmer Train Fiction Open and the Montana Prize in Fiction (judged by Alexandra Kleeman) and was chosen as runner-up for the Wabash Prize in Fiction. A former psychologist, Nellen lives in the Netherlands with her family. (updated 10/2017)