The night my teacher, poet James Tate, died, on July 8, 2015, Twitter filled with constellations of his lines. No poet had been better suited to a 140-character jaunt than he, and his good-natured charmers always with a stunner at their heart lit up the Internet in what was to become the first of many final tributes. I thought of many lines to add, but didn’t. I just watched. That night, as on every night of my life since I’d met him as an undergraduate, I felt the miraculous gift of having known him.  Suddenly that gift felt especially fleeting as, like water, it fell through my hands and out of my grasp.

A few hours before those tweets began, a mutual friend had gotten word to me that Jim was dying.  It was her text that allowed me to see those tweets in real time and to mourn inside the friendly circle Jim’s presence had created among poets and readers.  So many who’d loved Jim as I had had gone directly to his words for solace, and found their solace there.

The next morning I found myself driving the country roads north of my Connecticut home. I became vaguely aware I was in search of a river road, something he could never resist for long. The last time I spoke with Jim was at a reading he gave at Emily Dickinson’s house the fall before he died. On the way home afterward, four of us who’d gone together—my friend, her daughter, my son, and I—stopped in Hadley, Massachusetts, and climbed a small levee to a place with a view of the river I knew he loved.  We took a quick picture of our shadows elongating down the slope of the levee in the deepening afternoon, and then drove the two hours home.  I printed out a black and white copy of that picture for my office door, and sometimes I kiss it as I leave for class.

I made that drive, from my house to his house, a few times in the subsequent year, taking a day while my kids were in school, leaving as their bus turned onto Echo Valley, returning as it returned.  Knowing he wasn’t well, and also aware that a visit was a disruption for him and his family, I made my visit simply a kiss on my hand touched to the roof of my car as I passed his house. Once or twice I caught a glimpse of him reading on the porch, and then I’d find it difficult not to stop. But these drives had a ritual feeling—and since his and mine comprised a history of courtly rituals, a quiet almost invisible devotion seemed truest.

By the time I finally sat down to join those Twitter tributes by writing a remembrance of my own, I learned from a New Yorker article that it had been four years to the day since Jim started his last poem.  It was in the typewriter at his death, and a picture of the poem in the typewriter appears in the just-released collection.  I visited the room that held that typewriter just once, when as a student I dropped off a visiting writer who was staying at Jim’s house in Pelham, Massachusetts. I remember only that his study was two small bedrooms he’d converted into one large one by removing the center wall, that the typewriter sat in the corner on a worktable, and that the room was flooded with sunlight.

The morning after Jim’s death, my river-road drive led me to the parking lot for Bull’s Bridge, a covered bridge south of Kent. It was a short walk to where the bridge spans the rapids.  A square opening in the walled bridge allowed me to look down on the tumult, and the contrast between the running water and the sturdy wood reminded me of Jim’s steady hand along with the eruptions of brilliance and movement that only he could teach young poets. Of course, none of us could move like Jim, but in the way he approached our poems or read from poems he admired, he taught us a habit of attention combined with an openness to accident that could recognize the shape of the thing under the surface of our work, and enjoy, too, the way language flowed around and even playfully eroded it. He reminded us often that the language of a poem could usefully vie with its subject, something he wrote about brilliantly in a prose collection, The Route as Briefed:

I confess, I more often than not prefer the quiet, sometimes bemused, almost private poems that follow their course sometimes perversely, intuition and curiosity beckoning the poet toward a revelation, of which, it might be said, the degree of profundity is not the most pressing question.  The satisfaction to be gained, beyond the music and rhythm, is the shape the poem has traced in its movement through ideas and images from beginning to end.

The shape the poem has traced in its movement . . .

Every bend in every river calls to me of my time with Jim. Perhaps that’s because the movement of water resembles that of language—or something simpler and more elemental is underneath it, forcing its shape to surface.

On the morning of the fourth anniversary of Jim’s last poem, I am sitting—as luck would have it—at the bend in a river.  It’s a small turn off in South Britain, Connecticut, across from a soccer field.  My youngest son, Luke, is attending a goalie training with his coach and a few other goalies.  They’re getting their training in early, before the hottest part of the day.  I’m delighted with the accident of this river, the fact that I can watch it move while the boys practice.  It’s mostly tranquil, except for one rapid flowing part where the roots of a plane tree plunge down from the edge of the eroded hillside.  There the river gets shallow.  I can see the rocks underneath force their shapes onto the river’s surface.  I can also see that the great tree can handle the erosions of time. 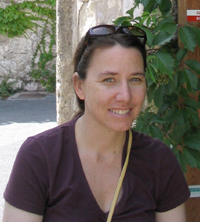 Carol Ann Davis is the author of the poetry collections Psalm (Tupelo Press, 2007) and Atlas Hour (Tupelo, 2011) and a forthcoming essay collection, The Nail in the Tree: On Art, Violence, and Parenting (Tupelo, 2019). Her work has been published in The Georgia Review, AGNI, The American Poetry Review, The Gettysburg Review, Beloit Poetry Journal, and elsewhere. An NEA fellow and finalist for a National Magazine Award, she is professor of English at Fairfield University, where she is founding director of Poetry in Communities, an initiative that brings writing workshops to communities hit by sudden or systemic violence. She lives in Newtown, Connecticut. (updated 4/2019)