The first line of Paradise Lost is wrong. Most people, most professors of English, even, don’t notice. Even if they remember the line, which is one of the grandest openings in the language.

“Of man’s first disobedience and the fruit”—the solid man, and then first, ripening as it spreads out on the tongue. The fall of letters like rain in that long, classical, scolding disobedience. Fruit, a wide vowel brought to a sudden close as the enjambement tumbles onward. Do you see the error yet?

The line is a syllable too much. In Milton’s blank verse epic—iambic pentameter, five sets of two-syllable feet—the opening has eleven syllables, not ten.

Most people do miss it—it’s a good game at your next literary cocktail party. Perhaps the ear needs time to adjust. Blank verse may not be as natural as it seems when, fifty lines in, the brain engages and the patterns flow back and forth, from the text to the mind and back, as the mind puts the template on. Even the best musicians need to be counted in.

I never noticed, certainly, when I first read the poem on a Kindle, packed in cacophonous train car on the Tokyo subway. In fact, I never noticed at all, until years later I fed the poem into a machine.

I’m a scientist as well as a poet. I study complex systems, which at this late stage in humankind’s knowledge means that I get to study everything we don’t understand. I focus on the products of the human mind, which makes me a cognitive scientist. And I focus, in particular, on what happens when minds get together, and so that means that, with some extremely charming collaborators, I get to study everything from squabbling birds to Wikipedia editors, the spiraling-out of the French Revolution and the Machiavellian strategies of Midwestern gas stations.

People do many things when they get together, but one of the most beautiful is the writing and sharing of poems. So when I fed Paradise Lost to my machine, on a cloudy and humid afternoon in the CUNY Graduate Center—the statistical patterns of the cars honking six stories below are still in my mind months later—I had some serious goals.

I wanted to study surprise, fascination, attention, what draws the eye. I knew about some laboratory studies from the University of Southern California, the so-called Baldi-Itti model, that had found a new way to quantify surprise. Baldi and Itti could take a video clip, and predict where people would look: not at the waving grass, no matter how fascinating, but the soccer player running over it. Not at the rush hour cars, but at the motorcyclist who turns the wrong way up a one-way street.

I wanted to measure Milton’s surprise: his wrong-way cyclists. But in order to do that, I needed to know his structure. We know what people see when they look at a video: light, colors, motion. But what do we hear when we listen to Milton? Far, far more—the words, yes, their meanings and connotations; but also their valence; their rhetorical figures, literal or metaphoric; how they glue together, their syntax, recursive and branching or centipede-like. And, of course, their sounds, their vowels, their consonants; where the stress falls.

As happens to scientists, just as much as to poets, I tumbled down the rabbit hole. I set myself what I thought was a simple goal—I would write some code to find the stress, the lexical stress. Dis-o-BE-di-ence; PA-ra-dise; where our voices linger when the word is on its own. And I would track the rate at which Milton could align that stress with the iamb, that ancient pattern of soft-hard, soft-hard, the metronome of English poetry, and often prose.*

If I had thought a moment, I would have realized how hard the problem is. It’s hard enough to stump Google, as you can verify by listening to Google Maps struggle to turn a string of letters into a sequence of sounds. They might hard-code in a word like Indianapolis, but if you drive in the American Southwest you quickly realize the arbitrary mess of convention, memory, and history that makes Cerrillos Road ser-RI-os, not cer-rill-US. My code struggled and failed; I taught it to search the web for new pronunciations, new accents, spidering out to the Oxford English Dictionary and, eventually, Wiktionary, a hot-bed of nerd phonetics.

This is a blog post, not a press release: I still don’t know where the surprise is in Milton. I have a statistical hold on it, but the error rate is high. It is easy to horrify a scholar—tell them the errors will come out in the wash. And they just might; enough lines of Milton might mean that the code doesn’t have to work perfectly. A ten or twenty, or even thirty percent error rate might be enough to pull a weak signal, a thin mathematics, from this artifact washed up, as it were, on the human beach. But not yet.

And that first line? I’ve tried the Milton question on anyone I think will be annoyed when they miss it. Jess, a supremely educated barrister in London, turned the tables on me by finding the solution as she spoke the line aloud. Disobedyence—like the ny in canyon, or the Spanish ñ. Turning a pair of vowels into a consonant is a trick, but Milton’s in good company: Virgil did the same in the second line of the Aeneid. As of yet, a machine hasn’t beat them.

*Perfect iambic tetrameter: there are no fractures in your foot. 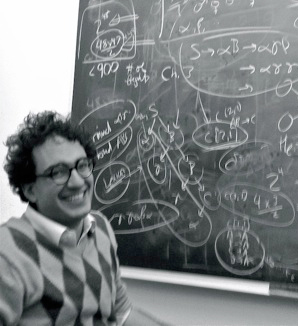 Simon DeDeo is a researcher at the Santa Fe Institute, where he works on problems in cognition, computation, and behavior. Other apostrophes from the series appear in Typo and Fence. (updated 4/2012)