My first encounter with Daryl Hine’s poetry came in the pages of Margaret Atwood’s 1983 anthology, The New Oxford Book of Canadian Verse in English. I see by a faded sticker on the back that I must have bought my copy at a Lichtman’s Books in Toronto while I was a student at York University in the early 90s, but it wasn’t until a few years later, when I was a graduate student in creative writing at the University of Houston, that I felt the urgent need, not to browse, but to read it straight through.

In Texas, I was surrounded by aspiring American poets with a strong sense of an American tradition in poetry, beginning in earnest with Whitman and Dickinson and growing exponentially up to the present. Much as I loved American poetry—indeed, one of the things I do now is teach modern and contemporary American poetry to undergraduates—I felt, as a Canadian, a terrible lack in myself of any comparable poetic tradition in my own country. The names of the few Canadian poets I both knew and liked—P.K. Page, Jay Macpherson, Irving Layton—drew nothing but blank looks from my classmates and extremely well-read professors. (To be sure, this was a few years before Anne Carson’s rise to fame in the United States; by the time I did my oral exam on her work in the late 90s, everyone knew who she was.) I determined to make a systematic search for Canadian poets I could admire, and plunged into Atwood’s anthology—only to find the first hundred pages a disheartening slog, relieved briefly by E.J. Pratt’s best poem, “The Truant.”

Out of my growing desperation I must have started skipping ahead, or skimming the table of contents for something interesting, and stumbled on the title of Hine’s poem, “A Bewilderment at the Entrance of the Fat Boy into Eden.” When I turned to the poem itself—in fact a sequence of four sonnets—I realized I had read the first sonnet before, in the same book, back in Toronto, and that I had liked it better than anything else I’d found in that anthology in my idle browsing; but that I had neglected to mark the page, and lost it, and couldn’t find it again, having forgotten the poet’s name and the title of the poem. So now I felt the excitement of rediscovery, and, as I read, the pleasure of reading a poet who was clearly in a higher league altogether, a poet with a much more interesting imagination and rhetorical and prosodic technique and range of diction than nearly all of the other poets I had encountered in that anthology:

Not knowing where he was or how he got there,
Led by the gentle sessions of his demons,
Now in the right and now in the left ear,
The fat boy trod ungarlanded in Eden.

Granted, the other three sonnets in what I later learned was a very early sequence weren’t as strong as the first, and the two other Hine poems Atwood had selected weren’t as good either; nevertheless, I was ready to explore this poet, if only I could get my hands—in that dark age before the internet—on his books.

Imagine my surprise and delight when, before long, I found two volumes of his poems in a used bookstore in Houston. Each had just been published a few years earlier, Postscripts in 1990 and In & Out: A Confessional Poem in 1987, and the publisher in each case was Alfred A. Knopf, no less. The books came with warm recommendations from the likes of Northrop Frye and James Merrill and Anthony Hecht, writers I admired. How could it be that there was this Canadian poet being published by what was, at the time, the foremost poetry publisher in the United States, and no one in Toronto where I had been studying creative writing had so much as mentioned his name? More surprises followed: to name just one among many, according to the author bio in those books, Hine had been the editor of Poetry magazine from 1968-78.

So, what had I found? Once I tracked down all his books of poems, and read them from cover to cover, I realized I had discovered the strongest Canadian poet of his generation, and one of the strongest Canadian poets of the twentieth century. Having just read, and been thoroughly persuaded by, Timothy Steele’s argument for the power of metrical verse in contemporary poetry— in his 1990 book Missing Measures: Modern Poetry and the Revolt against Meter—I was excited to find a compatriot who was so much craftier in his prosody than any other Canadian poet I knew, even Jay Macpherson. And his knowledge of and engagement with such a wide range of poetic traditions—ancient Greek and Latin, Spanish baroque, Elizabethan, French, American—revealed him as a true cosmopolitan, a perfect antidote to the literary provincialism I’d winced at in so much Canadian poetry. It was true that some of his poems were better than others; and on the evidence of his 1981 volume of Selected Poems, he wasn’t an ideal chooser of his own best work. But that just meant he needed a good editor. I made careful note, as I read, of which poems of his I thought were best, on the chance that some day I’d get to edit a volume of his selected poems. And I’m immensely pleased, twenty years later, to say that I’ve edited such a book at last, The Essential Daryl Hine, and that it’s just been published.

Harold Bloom called Hine “a great, and greatly neglected, artist,” and it’s precisely his artistry that I admire. During the heyday of confessional poetry, when many poets were loyal to the facts of their own perception and experience—even, or especially, when such facts conflicted with the claims of art—Hine was a shameless, even ruthless, artist. For Hine, the purpose of poetry was not self-expression, or even self-fashioning, but pleasure. As he put it, “For me a poem is a verbal object capable of giving a specific kind of aesthetic pleasure in itself. As such it is like a painting or a sculpture.” This aestheticism manifested itself in a variety of ways, each of which tended to make him unfashionable: he was a classicist and translator with a preference for poets like Theocritus and Ovid; he had a polyglot and cosmopolitan literary sensibility; and he had, as I say, a highly sophisticated prosodic and rhetorical imagination—to call him a formalist is like calling a Ferrari an automobile.

Every difficult poet is difficult in a different way. What makes Hine challenging for many readers isn’t a private mythology, as in Blake or Yeats, or structural fragmentation as in Eliot or Pound, or philosophical abstraction as in the later Stevens, or elusive meaning as in a lot of Ashbery or Mallarmé. On the contrary, Hine’s myths are mainstream, his forms coherent (if spectacularly varied), his ideas commonplace, his meaning (usually) clear. What makes his poems difficult to appreciate for some readers is the dazzling sophistication of the rhetoric and prosody and syntax—all things that many modern readers haven’t really been taught to experience in poems, at least beyond noticing a few formal or prosodic facts. This helps explain why Hine has been critically acclaimed for six decades by the most erudite among the cognoscenti, and neglected by just about everyone else. But it doesn’t have to be that way. To learn to read Hine well is to get in touch in a deep way with the elements of verbal artistry, the sort of thing the educated members of Elizabethan audiences, for instance, were able to appreciate in Shakespeare’s language, not least because advanced grammar and rhetoric and prosody were central to an Elizabethan education. We can read Hine for the same reason we listen to Glenn Gould, or watch Wayne Gretzky: the pleasure of virtuoso performance. 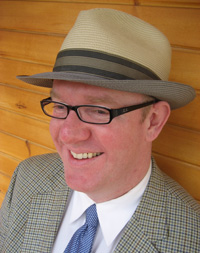 James Pollock grew up in southern Ontario and earned an MA and PhD in creative writing and literature from the University of Houston, where he held several fellowships in poetry. He was a John Woods Scholar in poetry at the Prague Summer Program at Charles University in Prague, and a work-study scholar in poetry at the Bread Loaf Writers’ Conference. His poems have been published in AGNI, The Paris Review, Poetry Daily, and more than a dozen other journals, and his book of poems, Sailing to Babylon, was published by Able Muse Press in 2012. His critical reviews have appeared in Contemporary Poetry Review, Books in Canada, The New Quarterly, and elsewhere, and a collection of his criticism, You Are Here: Essays on the Art of Poetry in Canada, is forthcoming from The Porcupine’s Quill. He is an associate professor at Loras College in Dubuque, Iowa, where he teaches poetry in the creative writing program. He lives in Madison, Wisconsin. (updated 7/2012)