The desk at which I write faces a window looking out on an old blue spruce. When the next word struggles to get through, when I try to glimpse again what once was almost seen, I find myself staring at the pine. It towers over the house. Winter winds sway it, and I suspect either it will one day crack and shatter our home, or that it’s the secret mast of the world, keeping the earth sailing its orbit. The cat, named Pip, prowls the chickadees and jays that flit in and through it. The young rabbits dart under its dark green skirts. As I write this, in mid-May, the bright-green needles burst out their many flames, tender as any newly born thing. My youngest daughter, Iris, likes to eat them—she says they taste like lemon tea. For many years the spruce has been my daily companion, a witness to my daily commerce. As Henry David Thoreau writes in his journal on September 7th, 1851: “The scenery, when it is truly seen, reacts on the life of the seer. How to live. How to get the most life. How to extract its honey from the flower of the world. That is my every-day business.” The pine tree is a true economy, an oikos-nomos, that in the most ancient of senses, teaches us the laws, rites, and customs of the house. And what is the hour’s lesson? Thoreau again, a decade earlier: “Neither body nor soul forgets anything. The twig always remembers the wind that shook it, and the stone the cuff it received. Ask the old tree and the sand.”

When she chews those new blue-spruce needles, I like to imagine that my daughter is enrolling herself in a strange school—swallowing this past autumn’s blizzard, gulping down a gale that blew long before her life began—where what you learn filters through the blood to the body entire.

This spring I’ve gone back to Thoreau’s Journal, feeling I need a tutor to the nature of the days—that by living through them, I’d forgotten how to live in them. It’s easy to worry that poetic work takes place apart from the days; it’s easier to worry that writing takes the days apart. Thoreau offers a balm to such anxieties:

Jan. 26. (1839). No definition of poetry is adequate unless it be poetry itself. The poet does not need to see how meadows are something else than earth, grass, and water, but how they are thus much. He does not need discover that potato blows are as beautiful as violets, as the farmer thinks, but only how good potato blows are.

The poem is drawn out from under the feet of the poet, his whole weight has rested on this ground.

Its eccentric and unexplored orbit embraces the whole system.

Comparison pales against honest encounter—no as, no like helps us to understand the magnitude of what we stand before. Metaphor might mark genius of a kind, but there are other forms of genius—the indwelling daemon of utmost locality which, to describe, is revelation. The spruce tree. The rabbit, red-lace veins glowing through its thin ear. The poem undoes the ground of our certainty, refusing us the ease of assumptions, and puts us in orbit with the whole revolutionary fact: that the world is, and each one of us in it is part of the eccentric whole. Thoreau goes on, two years later, to reflect on what proper writing might be:

Jan. 22. I hear it complained of some modern books of genius, that they are irregular, and have no flow, but we should consider that the flow of thought is more like a tidal wave than a prone river, and is the effect of a celestial influence, or sort of ground swell . . .

Jan. 26. Good writing as well as good acting will be obedience to conscience. There must not be a particle of will or whim mixed with it. If we can listen, we shall hear.

When I listen, I hear a radical suggestion: that a healthy poetic practice might remove us from ourselves. That the intricacy of self isn’t an imperative toward expression, but far the opposite—that one might learn how to relax that tightly wrought self-knot and, in doing so, enter into another flow by letting in a larger influence. A celestial groundswell whose command is nothing more than to let what rises arise. Such writing is elemental, is root-work, is blue-spruce-needle-work, that opens to the world by letting the world open it, as the eye exists because the sun does, as the lung exists because there is air. It all feels so simple and obvious, until you try to listen so as to hear.

I’ve been trying to listen to poems for nearly thirty years now, somehow feeling ever more at the beginning of the work. Throughout that time, I’ve sought various collaborations. Most recently, I’ve been at work with the potter-sculptor Del Harrow. He’s been making pots that explore non-orientable geometries—Klein bottles, Möbius strips—and then writes a small poem that both mimics and continues the work of the clay. He treats words as another kind of clay, which feels right to me—pressing the sounds of words into other words, letting the ear guide the mind, not the standard reverse. A pot itself is a collaboration in Thoreau’s sense: a collaboration with earth, water, fire, and time. Language adds to the experiment that other element, the mind. I take the lines Del has written and try to sculpt the poem to a finished form, one that worries about other integrities aside from meaning, that wants only to find a shape that holds, as in this iteration, inspired by the philosopher Georg Simmel’s thinking about handles. Simmel considers the nature of the handle, the fundamental generosity of its nature, which bridges two disparate realms: that of the object, and that of the human. The handle helps us grasp what is otherwise ungraspable. So one might learn to think about the poem as a strange handle to what the poem considers. 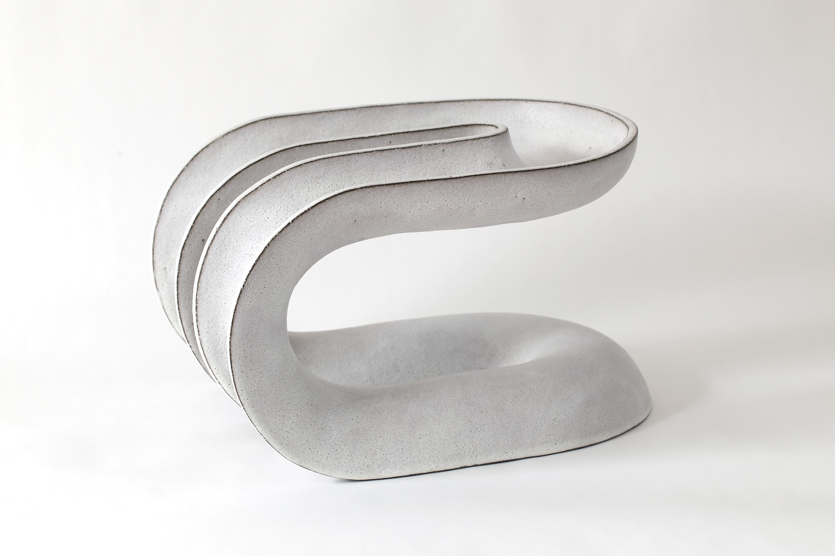 It is weird work, I know, almost empty of the pleasures a lyric poem tends to give us. But I’ve come to love that refusal, if refusal is what it is. Maybe it’s just a reluctance—a reluctance born of the responsibility collaboration can thrust us into, an attention other than our own. It is a kind of listening that at heart only wants better to hear, that eavesdrops on the thinking of which we ourselves are just another idea, to discover yet again what Thoreau discovered, that “all matter, indeed, is capable of entertaining thought.”

And as the old tale of our lives being made of breath and dust might remind us, we ourselves might also “entertain thought” in ways radically different from what we imagine—not as mental work, but as that which is found only in deep forms of play, a kind of work in clay. Thoreau records a dream in early fall 1852:

Sept. 26. Dreamed of purity last night. The thoughts seemed not to originate with me, but I was invested, my thought was tinged, by another’s thought. It was not I that originated, but I that entertained the thought.

The river is getting to be too cold for bathing.

A dream about purity ends in the bodily realization that the river is too cold to bathe in—ablution must be found in some other way. Lovelier yet, that the dream of purity—which word connotes a sterile perfection—is a dream of radical influence, of harboring within oneself another’s thought and holding it with so much care that it tinges one’s inmost self. Those early spring weeks spent with Thoreau reminded me of the impossible aspirations that first drew me to poems, though at the time I couldn’t have defined it—some sense, ever more incipient, that a poem participates in the ongoing creation of the world. If such a wild, innocent thought could be true, it means that the poet is in a constant collaboration with the seasons, the hours, the days. I love the thought desperately—a desperation born of the helpless realization of how hard it is to be so simply in the world that one hears the song it would teach you to sing. I’m looking out the window at the blue spruce, even now as I write. And though it’s hardly there, it must be mentioned: the reflection in the window’s glass, the image of my own face staring back, the double gaze. How to remove that face? How to step outside when there is no outside—when I am the place I’m in?

Through the first many months of the pandemic, the poet Bruce Bond and I sent poems back and forth, each thirteen lines long, as if unable to reach the end that would make a given poem whole: a sonnet. It’s at that penultimate point that we’d hand the poem to the other—not to finish, but to start over again. At first, an image buried in one poem would give rise to the next. Bruce wrote:

Reading it, I sensed that oldest image of passage from life to death; I heard the carrion crow:

“Meet your wound,” my mother said, pointing
at me. A coin fell out of my eye, why?
I wasn’t crying. The ferryman holds out his hand
in what is always the entrance to the present tense.
Dawn’s black river. “Meet your fallen tower,”
my mother said. The crow looked, called, flew away.

So we would proceed, one poem learning to breathe by the breath of the other’s. The collection is titled Therapon, an ancient Greek word from which our contemporary therapy comes, meaning a servant, a substitute. Patroclus served as Achilles’ therapon. He cooked the meals; and he strapped on the hero’s armor, and went to war as him, and died doing so. It is a strange and powerful role, to put on the daily griefs another bears, and wear them as a way of offering the other a kind of relief. During the many months that Bruce and I passed poems back and forth, as I looked through the window at the spruce, it wasn’t my face I saw staring back, but someone else’s, a substitute—deep therapy when therapy was most needed. It let me build a little mind around a thought that wasn’t mine, only to find the minor miracle, that by cherishing another’s life, I could grasp more fully my own.

For many years I’ve imagined a person as a kind of jug with the handle on the inside. We spend our lives trying to figure out the riddle of how we can pour ourselves out. Collaboration gives us this primary gift: a handle. It lets one get hold of the whole amazed burden of living our hours, and days, and years, none of which we know how to finish, none of which we want to end. You say what you can say. Then you send the poem off to your friend. 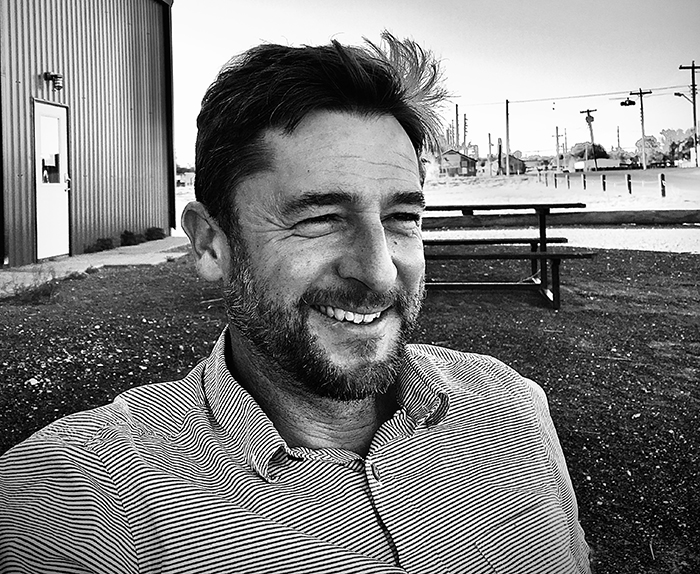 Dan Beachy-Quick is the author, most recently, of the poetry collection Arrows (Tupelo Press, 2020) and a translation of Ancient Greek lyric poetry, Stone-Garland (Milkweed Editions, 2020). His other poetry collections include gentlessness (Tupelo, 2015); North True South Bright (2003); Spell (2004); Mulberry (2006), a finalist for the Los Angeles Times Book Award for poetry; This Nest, Swift Passerine (2009); and Circle’s Apprentice (2011). He is also the author of A Whaler’s Dictionary (2008), a collection of linked essays responding to Herman Melville’s Moby Dick. His work has been supported by the Monfort, Lannan, and Guggenheim Foundations. He teaches at Colorado State University, where he is a University Distinguished Teaching Scholar. (updated 4/2022)