The chapbook, as a mode of publication, can possess many virtues (humility, affordability, concision), but as a poet and a reader I am drawn most to its slightness, the sense that as an object the book is barely there.  In reading from a stack of recently published chapbooks, I thought often of Vasko Popa’s “Little Box” poems, a wonderful, wry series in which we follow the adventures of a little box, gendered most often (and perhaps inevitably ) female.  In the first poem, the little box, who has “the whole world she was inside” inside her, becomes by the strength of her wishing just a box again and we are advised that “you can easily put it in a pocket / easily steal it easily lose it / Take care of the little box.”  A chapbook, especially when placed back on the shelf, is a thing easily lost.  And perhaps it is this quality of slimness that results in the absence of chapbooks from bookstores, advertisements, lists of nominations for national awards.  (There are exceptions. Bidart’s 2002 “Music Like Dirt” comes to mind.)  And the chapbook is often sold by subscription to a series, a practice which partially solves this problem of being near invisibility: lined up on a shelf, the series achieves a respectable bulk.  The most powerful work that I read made use of the chapbook’s troubling nature: so thin, so quickly over.

In Narcissus, Cecilia Woloch has fashioned a gorgeous, rigid world.  It is silvery, of course, and glittering.   It is full, especially at first, of shifts and fractures resulting from the limits of the speaker’s fixed positions.  In Part I, the poems are locked in place.  In “Anniversary,” the book’s first poem, the speaker looks back at her wedding and questions that past love.  “Didn’t I stand there once,” she asks and then asks again, “And wasn’t it sacred . . .?” and again, “And were we not lovely, then, were we not / as lovely as thunder, and damp grass, and flame?”  Immediately following this retrospective questioning, the second poem locates her on a bridge in Paris with Sarah.  She speaks through a “postcard,” in prose, to a presumably distant friend, also named Sarah.  Such apostrophes continue in sequence (retrospective view of the ruined marriage, postcard from Paris, retrospective view) until the end of Part I, when the stricture begins to loosen slightly.  In “Postcard to Myself from the Lower Carpathians, Spring,” she speaks to herself: “I want not to forget those nights in the lower Carpathians, deep spring, sleeping alone. . . .” While this slight shift at the end of the section suggests the possibility of change, the cry of the occasion remains separation, division into two, a rigid split.  One speaker calls out in two distinct modes and the twain, in Part I at least, shall never meet.   In “Postcard to Lisa, with Lisa, from Metro Line I,” a man has fallen in the train and the speaker’s noticed a gash on his forehead.  The speaker reports that though she pulled the alarm, nothing happened, so she leapt from the car and ran ahead to the conductor’s cage where the conductor was “standing inside, in darkness, watching the scene on a little screen.” She says “I could not think of what to say in French.  Un homme.  Il est tombe.“

It is this situation, the conductor fixed in position, watching the event on a screen, that Woloch forces into predicament.  She—and we—want freedom from the scenic, from viewer and viewed, and in a neat sonnet-like way, we find it.  Or rather, we find ourselves instantly in it, in the healed and whole world of Part II.  The split and division of Part I is past; the voice now speaks wholly of and to her new lover present in glorious, dirty gorgeousness in her daily life.  The poems here are filled with exclamation and adoration, with joy: “My campesino / barefoot / in the kitchen. . . . My dirt-poor prince / among the sparrows and the power lines.”  Woloch begins this section with an excerpt from H.D.’s “Eros”: “to sing love / love must first shatter us” and indeed the speed of the chapbook tightens the causal relationship.  A seems to result in B because B follows A, and then that’s it.  It’s an effect that would get lost in a larger book.  Still, it is what is left out, between sections, that edges this book with brilliance, keeps it from slipping into a sentimental take on the riches of a second marriage trumping the first.  These older lovers, richer in experience and wiser in age, are not foolish enough to ask of love that it “kiss away sorrow.”  As well, they know to “be always late,” with a play on two meanings of late: to experience urgency, a speeding toward the appointment ahead, and to be late, to live with an intimacy with death, or as that Zen koan suggests, to live as if already dead.   These are wisdoms I for one hope to attain but the book is much more interesting than its own lessons. What startles is absence of the process by which she has arrived at “the readiness that is all.”  It has happened off-stage, but seemingly in an instant, and haunts the book long past its final note:  “Who stands within the mirror / and the mirror turns to rain.”

Much has been made, in assorted blog-postings, of Olena Kalytiak Davis and “post-confessionalism”  (is she or isn’t she?) but I confess to not caring too much about the term or her affiliation or why she stands for that state more than any of a hundred others.  Her new chapbook, On the Kitchen Table From Which Everything Has Been Hastily Removed, is a wild ride, compelling the reader forward by the sheer force of its urgency and manic energy.  Here is an excerpt from the first poem, “The Lyric ‘I’ Drives to Pick Up Her Children from School: A Poem in the Post-Confessional Mode”:

“i” has not told her lover that “i” is not in love with him any longer, but “i” knows he knows, must know.
“i” has not told her lover that “i” had a long conversation with “i’s” x-husband on the phone last night.
“i” thinks “my sidestepping and obliquities”.
“i” thinks love is what went wrong.
“i” feels elizabeth bishop reprimanding “i”.
“i” thinks like a gentle loving firm almost slap but really just a squeeze of, not on, the hand from a, the, mother neither one of them had from very long, long enough.
“i” has not thought of “i’s” dead mother in a long time.
“i” thinks of jonatham letham [sic] and his dead mother and his wall of books.

The use of “i” presents of course as a critique of the conventions of the lyric poem.  We are made awfully aware, as we are carried along in this meditation, of the poet-self that is being constructed and of the poet-self who is doing the constructing and, in between, or impossible to reach, the selves we must miss.  (And this book is rich with things missing: ex-lovers, an ex-husband, the muse, a lost poem, the dead mother.)  And while the use of “i” is a relatively simply trick, it has powerful effect.  There is, from the first moment in this book, a driving need to escape from oneself, as in (Lowell) “I Myself Am Hell—Nobody’s Here.”  (The second poem in the book is titled “Robert Lowell.”)    This is a poetry full of the quick break for escape, by any means possible: the over-done rhyme, shielding us from the threatening emotion it simultaneously creates (“j’accuse je m’accuse je am a recluse / recklessandlostandloose / and here’s my noose: thought i thought i thought / it through”); the twisted syntax also forbidding entry through language; the frenzied references outward; the manic word games.  But the games often give way:

a frost covered
a last life

Toward the end of the book, in the beautifully realized “Orpheus and Eurydice,” the speaker, underground in Manhattan on a subway train, runs into a lover she parted from years ago, at the descent to the subway at Broadway and Lafayette.   The poem moves from wry humor (the speaker insists “I usually look a lot better than this”) to a questioning into his experience (“for all that, he must of said to himself, she is there. // he had watched me walk in! / what must have fluttered behind his eyes, inside / his neck and heart and hands / and cock.  What would he do or say?”) to the goodbye (“he stood: / I gotta go and I: that’s it?”).  At the end of the poem the speaker returns to the world of the love-dead. She proceeds to tell her “latest lover the latest news” and indulge in a little phone-sex, all while a few numbers play in her head, the last number being news that stays news.  After the subterranean encounter, this ex-lover (whose absence had been her muse: “for many years that backward glance was my way of life of art / i was made by that being apart”) is named and is declared dead.  And here, at the naming of this loss, the games stop.  Humor and bravado collapse, reminiscent of Bishop’s stumble at the end of “One Art”.  In the final poem of the book,”Methow 19:19″, the speaker is alone (“I yearn for no one today / and i’ve no hope to . . .”) and left with/to herself, the root of the problem all along.  The final utterance of the book (and only two short poems follow “Orpheus and Eurydice”) is a plea:

“help me, Horse, for i can neither neigh nor sigh
If Thou hath truly made me in Thy Sinewy Likeness:
Let Down the Coarse Ropes in Your Neck
the Yellow Gorsed Sleep in the Corner
of Your Wet Black Eye”

Of course one can’t help but think of the end of Ariel and if I knew Olena Kalytiak Davis well, I might worry.  But I don’t know her.  Or maybe I do.   I was opened up and hurt by the depth of sorrow in this book, as when I am opened and hurt by Anna Karenina’s struggle to let go her pocketbook so as to pitch herself from the platform.   I suppose the trickier question is whether I ought to feel compassion.  And perhaps this is the gist of post-confessionalism.  I felt moved by this book but not without an attending worry that I might be a sucker for feeling so.  In any case, the book’s movement is quick and tornadic, driven hard from beginning to end, without room for escape.

In reading for this review, I also thought often of my colleague’s daughter who, I am told, sent over 1,100 text messages last month alone.  Both of these chapbooks give evidence that the quick and brief can be substantial and long-lasting, rather than quick and just gone.

Kate Northrop is the author of three poetry collections: Clean, forthcoming from Persea Books in 2011, Things Are Disappearing Here, and Back Through Interruption, which received the Stan and Tom Wick Poetry Prize from Kent State University Press. A recipient of a Pennsylvania Council on the Arts fellowship, Northrop is a contributing editor at The American Poetry Review and teaches in the University of Wyoming’s MFA program. (2/2010) 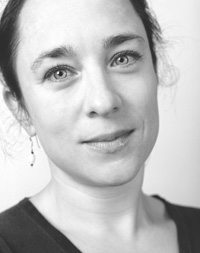 Kate Northrop is the author of three poetry collections: Clean (Persea Books, 2011), Things Are Disappearing Here, New York Times Book Review Editor’s Choice and runner-up for the James Laughlin Award, and Back Through Interruption, which received the Stan and Tom Wick Poetry Prize from Kent State University Press. A 2014 recipient of the Jeannette Haien Ballard Writers Prize, Northrop is a contributing editor at The American Poetry Review and teaches in the University of Wyoming’s MFA program. (updated 10/2014)