As soon as you see someone in a cab at night
you want to look at them basically because of
the drama of something shiny in the dark
like a yellow taxi, the way
skylines are very nice to look at, or of course
those more fundamental kinds of skyline,
constellations—stars—which form an end to our
way of thinking. The city is a kind of constellation
if you want to get fancy:
picture a map of the U.S. in the dark
with the major cities against it with all
their lights on. I like that:
this is “Chicago” instead of a useless
Greek mythological reference which does
express a truth about something, but to so few.
New York. And these would be new references
which have already been well established
but which are still surprising and disgusting
as I imagine various myths must have been since they
rarely mention disease except as plague, which is a
legality. The lesson was that it was supposed to be
condign: the same yellow school bus
with one face pressed against the window
and attendance being kept: or pain is very
dark but will be light-filled: not this limestone
daylight which cuts across our hands,
but the light which both of us love
when it fails innumerably throughout the city. 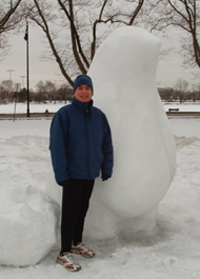