A man leans out of an apartment window in a Baltic town and throws into the air a rough model of a cruise ship, half as long as he is. It is possible that he is catching the ship, but this strikes us as unlikely. One would only throw a ship, a train, a car, a plane (imagining oneself as the engine), and not catch them. So—man, open window, cruise ship, and an implied crash moments later. Watching, we get a lift in the belly, then we’re braced for a notable sound. And then splinters on the sidewalk.

Still, we have those few seconds in the air, before the crash. We suppose we will always have them because this is a photograph. A photograph used in an advertisement for a gallery show (and, honestly, we don’t know if it was taken in a Baltic town or even if we could name with confidence such a town). We flipped back and back and back in the magazine to the page with the ad—three times and we got blinked into the story of the photograph. We have been walking around under the man and his launched cruise ship for a few days now. The ship is suspended over our heads and we’re waiting for it to come down.

But perhaps it won’t. We don’t know if this tale he’s put us in includes gravity. In a tale, we could be turned into something, we could be cooked, we could fall in love at the sight of a shoe, we could die from the most singular, gruesome coincidence, or fail to die from lethal ministrations. We could unzip ourselves from the belly of a beast, or lose our way because the forest, the mountain, the river, the wind are animate and plotting against us. We could sail through the air, on the sea, to the edge of a flat world.

The crash, when we step inside it, is gargantuan and silent and tipped on its side. We’re standing on what was once a wall, the former floor to our right, the ceiling to our left. In front of us, mounds of debris, the objects of a great-room—a ballroom, a lounge?—at every wrong angle. Everything seems slightly larger than it needs to be, Papa Bear sized—high-backed barstools, brocade settees, bookshelves still attached to the upended wall, having spilled their books to the splintered mounds below. There is a triangle of books still falling, caught and dangling from the shelves as if this were a photograph come to life. Two flat screen TVs under rubble, though, flicker the torsos of newscasters.

At our feet is a wave of orange life vests, so we suppose we’re in the inner chamber of a ship. And we suppose, from the royal blue walls, the gilt trim, the piano nailed to the perpendicular floor, that this ship is meant for class-conflicted leisure—scotch and reading lamps during the day, Liszt and Chopin over dinner, and, after, karaoke, cocktail bingo, and midnight chocolate fountains.

Our upright postures are wrong for the room and we find ourselves leaning over, trying to peer into the wreck, to find out what has been wrecked. When upright, we suppose, the room was evidence to its occupants. Evidence that the American rec room and fin-de-sicle European imperialism might be combined, reproduced in the unlikeliest of circumstances, and leased.

When we right ourselves again, we see that books have been gutted and their pages washed up near us—page of House of Mirth, page of wasp ecology, page of Hegelian dialectic. No way to turn the page.

And now our eyes have returned to the life preservers and observe two things that needle dread under our skin. One: taped to the back placket of each vest is a flashlight. We imagine a hand stretching up its own back, tugging to release the light in a sideways darkness. And two: the vests show no signs of wear. There are no bodies. We, on the threshold, are the bodies.

Once upon a time, we are on the sea. Well, we think we are on the sea because we’re inside a ship. But we never see the sea, never look outside—we are satisfied in every way with the interior. Our legs and viscera and inner ear register the vast bowl of water upon which we presume we’re floating. We are happy to be altered in a way that’s beyond our control while never leaving the ship’s lounge. We hear that there are many features—a boutique, indoor pool, conference rooms where one might learn to fold paper into a mammal or count to ten in a tonal language, but we find we are happiest just here. We arrive early from our berths, stay late. We’ve browsed the bookshelves that begin with rows of classics and then give way to mysteries, true crime, and romances, historical and contemporary. There is a well-stocked bar with high-backed chairs, presumably so we might both feel and remain upright while drinking generous cocktails. In this room we dance and read and observe others or pretend to while we gallop after the scrolling ticker at the bottom of the grand televisions. Numbers we cannot decipher dot the borders of the screens. And the ship feeds and feeds us. We spend considerable time imagining what might be brought out next on paper doilies, though we have trouble remembering the last thing we actually tasted.

We’re floating on the ocean, we’re sure of that. It is, at least, a reasonable guess. But we don’t know where, we don’t know our captain, we don’t know how long we’re scheduled to keep up this leisure, these nights with a musical program and a cash bar, the way the staff uses our names so we don’t think that they think we are forgettable, expendable.

One night, the room heaves, and we think perhaps this is the beginning of the story. We try to remember the rules of fairy tales: if you see beauty or ugliness, it may be a disguise; proclamations, pleas, and invocations will be repeated three times; and the ending is always known at the beginning. Perhaps one day we’ll go up on deck, take in this storied ocean. But what can we do? We are at sea. We are in a tale. Warnings and predictions will go unheeded despite the certainty of their coming true. 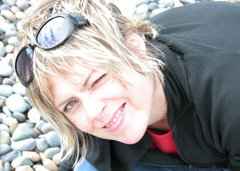