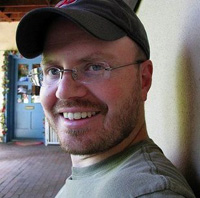 Steve Edwards lives in Lincoln, Nebraska, with his wife and young son. His fiction and poetry have recently appeared in Sou’wester, Passages North, and The Fourth River. His memoir, Breaking into the Backcountry, chronicles the seven months he spent in “unparalleled solitude” as the caretaker of a 95-acre wilderness homestead along the Rogue National Wild and Scenic River in southern Oregon. He is working on a nonfiction book about his grandfather, who, in 1942, was featured on the cover of LIFE for a photo-article about “the strength, intelligence, and fiber of the raw young men” drafted to fight in World War II. (updated 4/2011)